Flower of the Month: Primrose


A warm welcome to regular Flower of the Month contributor, Susan Ernst.

Now the bright morning star, day’s harbinger
Comes dancing from the East, and leads with her
The flowering May, who from her green lap throws
The yellow Cowslip and the pale Primrose.
-from Song of May Morning by Milton

Primula as a genus or plant group, has over 500 species and are classified and arranged into various groups. Information on these classifications can be found starting here.  We will take a look at those most common and familiar.

The English Primrose, Primula vulgaris (Latin for “first one” and “abundant or common”, respectively), has been the quintessential harbinger of spring in Britain, as evidenced in the writings of Milton, Shakespeare and numerous other writers of the 17th, 18th and 19th centuries.

Gertrude Jekyll (1843-1932), famous British landscape designer wrote:
“More than half a century has passed, and yet each spring, when I wander into the primrose wood and see the pale yellow blooms, and smell their sweetest of scents, . . . for a moment I am seven years old again and wandering in the fragrant wood.”

Forbes Watson, 19th century garden writer wrote:
“It is the very flower of delicacy and refinement; not that it shrinks from our notice, for few plants are more easily seen, coming as it does when there is a dearth of flowers, when the first birds are singing, and the first bees humming, and the earliest green putting forth in the March and April woods; and it is one of those plants which dislikes to be looking cheerless, but keeps up a smouldering fire of blossom from the very opening of the year, if the weather will permit.”

The leaves of this plant, and all Primulas, grow in a basal rosette, meaning a cluster of leaves growing in a circle which remain close to the ground. The leaves are a light, fresh “spring green” color and are crinkled. The fragrant, pale yellow flowers rise singly on long stems. Purple and blue variations can sometimes be found growing wild. 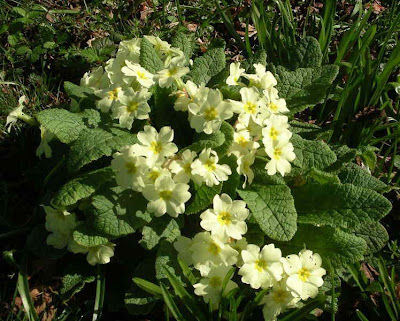 As a flower of early spring, it is not surprising that in the Victorian Language of Flowers, primroses represented early youth and young love. It was said that if a young woman were to come across a primrose before Easter, while out in the fields, she would be married that year. In Catholic symbolism the primrose is a flower of mercy and compassion. If a sinner passed one by, the primrose would assist him and save his soul.

The Cowslip, Primula veris (Latin for “first of spring”), also mentioned by Shakespeare, bears clusters of small yellow blossoms held on a central stem above the rosette of crinkly bright green leaves. 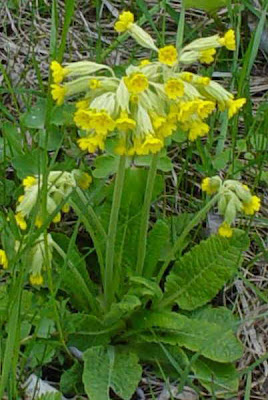 The flower clusters resembled a bunch of golden keys and were once believed to point the way to hidden treasure and open the locks of castles. Another common name for this plant was Paigles, which was an old Anglo-Saxon term referring to St. Peter, who held the keys to the Kingdom of God. Himmelschusslechen is the German term for this plant and means “little keys to heaven.”

The primrose (including cowslip) was used medicinally through the centuries to treat several ailments, including as a sedative and to “strengthen the nerves.” It was used as a tonic for the complexion. In the kitchen, wine has been made from the flowers. Flowers are also candied and used to decorate cakes.  The flowers may be brewed into a tea or can be eaten fresh with cream. The leaves are added fresh to salads or boiled as a potherb.

P. polyanthus – brightly colored flowers of pinks, blues, red, white and golds with a yellow center. These are the primroses most often seen in the United States. 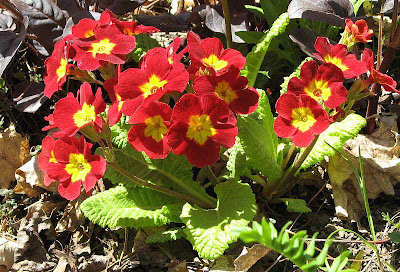 P. auricula – available in many colors with a contrasting center. The leaves are evergreen. This variety was very popular during the Victorian era. 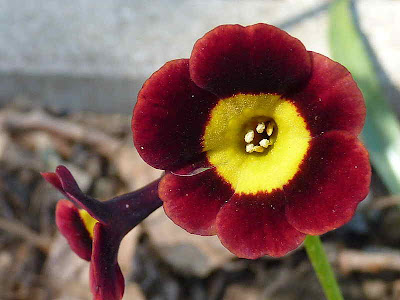 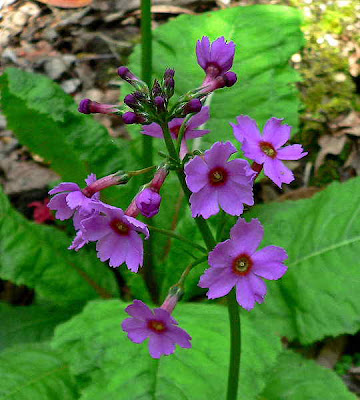 P. malacoides – Fairy Primrose – grown as an annual or potted plant, the small flowers in clusters on tall stems are available in pastel shades of pink, lavender and white. 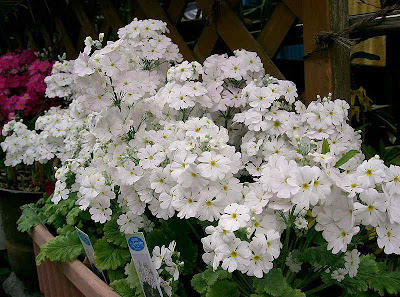 (All photos are from Wikimedia Commons.)