Thank you to Susan for yet again providing us with an interesting article about our flower of the month.

The cadmium red Field Poppy, also known as Corn, Flanders or Red Poppy (Papaver rhoeas) is a hardy annual plant that grows wild in fields in parts of Europe such as Great Britain, France and Brussels.  It is also cultivated in gardens and wild flower meadows. 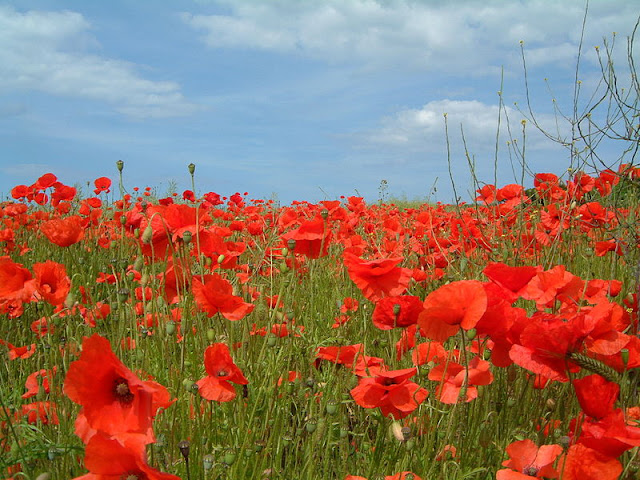 The field poppy has been a popular flower throughout history. Dried field poppies have been found in the tombs of ancient Egyptian princesses.  Their fleeting beauty has been immortalized in paintings by Claude Monet, Robert William Vonnoh and other Impressionists, Odilon Redon, Vincent van Gogh, and Georgia O’Keefe among many others. (I created a board on Pinterest to gather copies of these paintings together into one location.)

The Field Poppy became a symbol of remembrance in 1918 for the soldiers who fought and died in World War I. Inspired by the poem “In Flanders Fields”, American Moina Michael began wearing a red silk poppy to honor those fallen soldiers. She campaigned to have it adopted as a national symbol of remembrance and in 1920 the American Legion did just that. This symbol was also adopted by the Commonwealth Nations of Great Britain, Canada, Australia and New Zealand. Red paper poppy flowers are sold and worn on Memorial and Veteran’s Days in the United States and on Poppy and Remembrance Days in Great Britain.

As their common name might suggest, Field Poppies are easy to grow. Select a sunny location with well drained soil. Loosen the ground and scatter the seeds evenly over it. This is best accomplished by mixing the miniscule seeds with sand. The seeds can be purchased from some suppliers with a coating that makes them larger and easier to sow.  Water regularly and remove any competing weeds. Sow the seeds in late autumn or early spring as they are cold hardy and sprout as soon as the soil warms up. Remove the flowers and stems as they fade to encourage new flower buds. This will extend the bloom time from late June into August. At that time allow the flowers to go to seed and scatter onto the ground. Follow this routine and you will have poppies year after year.

Besides the brilliant shades of red – from cadmium to scarlet to crimson – hybrids such as the Shirley Poppies will provide a range of colors from pale to deep pinks, apricots, creams, mauves and whites that do not have the characteristic black centers.

The Field Poppy, like all poppies, produces a milky white sap, called latex. Unlike its relative, Opium Poppy (P. somniferum), this sap does not contain opium. It does contain rhoeadine which has been used as a sedative. The seeds are sometimes used in baking as a substitute for bread poppy. The flower petals have also been used as a wrinkle preventer as well as a dye for wines, medicines and inks. The oil from the seeds is used as a medium for oil painting.

Though the flowers last a few short days, it is a joy to watch these plants grow. First putting forth nodding buds on thin, wiry stems that open to brilliant color, they eventually transform into ornamental seedpods. These can be cut and used in dried floral arrangements and wreaths along with the seed heads of other wildflowers. A perfect autumn centerpiece.


Thank you so much Susan.

Please link any work you do on the Flower of the Month using the linky below.