For my summer book I have chosen a children’s author who is probably one of the most read in the UK, if not worldwide and whose books dominated my own childhood. Even her signature is instantly recognisable to millions, adorning as it does the front of many of her books. I am talking of course about Enid Blyton. 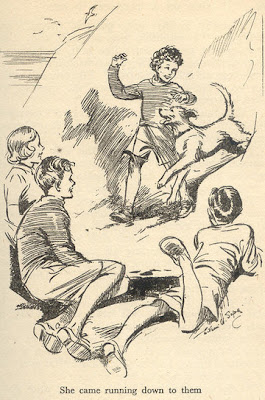 Blyton died in the year I was born, but her books continue to sell massively today, for instance wiki says that over 2 million Famous Five books are sold each year, and that is just one of her series. Blyton was also responsible for creating Noddy, The Secret Seven, The Five Find-Outers, Malory Towers, St Clares, Naughty Amelia Jane, Mr Pinkwhistle, Mr Twiddle, The Faraway Tree, The Wishing Chair, The Naughtiest Girl in the School, The Adventure of series, The Secret of series, The Barney Mysteries and many other series and stand-alone books. She also wrote a long standing column in Teacher’s World magazine and other articles. Her output was 600 books. 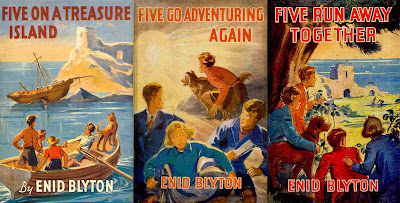 I don’t think I really need to say much about Blyton, so much has been written, and if you are interested a cursory google will lead you to lots of books, articles and websites. Her books are now collectable, especially in early editions, although more recent paperbacks of the more well-known titles are of course not. There has been a lot of controversy about her, firstly over her use of simple language and repetitive plots and then later over her dated and xenophobic attitudes towards sexism and racism. It is taken for granted in many books that the boys protect the girls and do the adventurous parts whilst the girls keep the camp tidy and it is enough proof of probably criminality that someone sounds foreign.

The Famous Five series was one of my favourite summer reads, although different books in the series do take part during various times of year. However they always have a summer feel to me, and the iconic image is of the five out exploring in boats or on bikes, wearing shorts and drinking ginger beer. The first book is the one I am highlighting today and takes place on a ‘Treasure Island, Kirrin Island that belongs to one of the five, George, a girl who wants to be a boy. Her three cousins, Julian, Dick and Anne come to visit and along with George’s dog, Timmy, first manage to make friends despite George’s initial reluctance and then to explore the island, of course having adventures and finding treasure along the way. 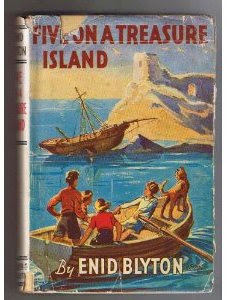 The books were initially illustrated by Eileen Soper who was an artist producing etchings and a royal academician. As an artist her work had two strands, depicting children and depicting wildlife, although in later life she devoted more time to wildlife, becoming a founder member of the Society for Wildlife Artists. Her illustrations of the Famous Five books coloured my view of the characters, and I visualise them very much in that vein. I also find them much truer to the characters as they appear in the books, at the time they were written and set than the more recent updated versions with all the characters wearing jeans. 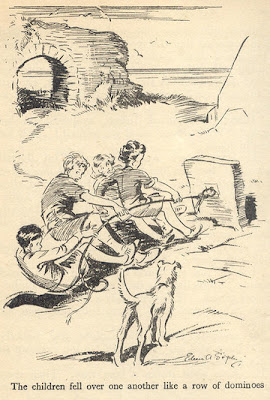 Project
For the project this season I’ve decided to go with a treasure map. There are lots of ways this could be done. Your map could be a real map to buried treasure or a map to a special place. You could invent a map based on traditional elements such as ‘Dead Man’s Cove’, ‘Here be Dragons’ ‘X makes the spot’ etc. You could make it a more personal treasure map and use it to show a life journey to a special point (eg through a pregnancy or engagement). Or you could go and find treasure using a real map and do some geocaching!

My treasure map is a map of the area I lived in as a child taken from Google. I have highlighted a lot of the places that were special to me in some way and notated the map. I did a general ‘old’ background for the page with torn edges, and this lets the pages before and after show through, so this is how I have photographed it. 
Don't forget to share your work with us using the linky below.